This version of the EMAN2 Tomography Pipeline tutorial is designed to run on well equipped laptops or standard workstations, unlike the full tutorial which requires a well-equipped tomography workstation. It should be possible to complete this tutorial in a reasonable time on a computer with 16 GB of ram and 4 cores, but resolution will be limited to ~15 A, not the subnanometer resolution provided by the main tutorial. 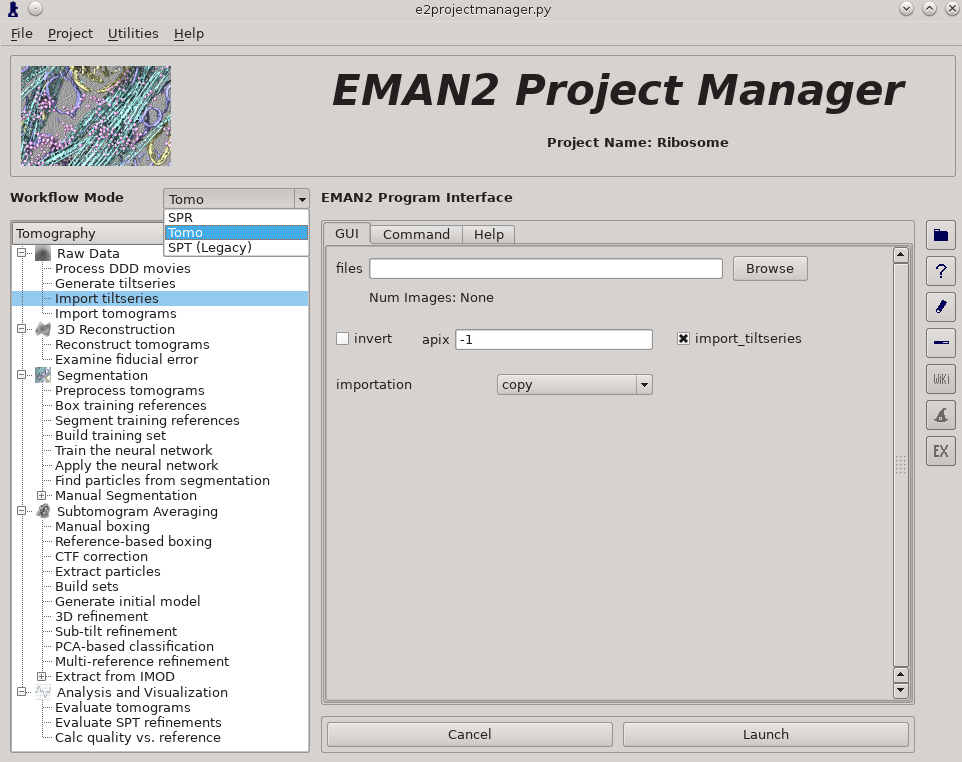 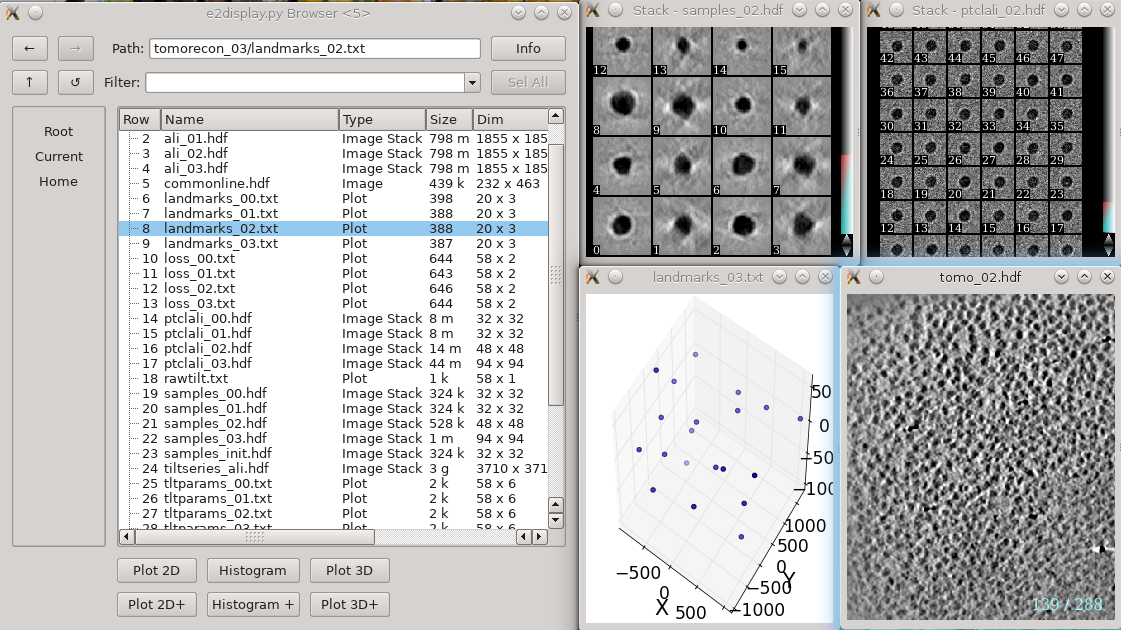 Note that this program is only estimating CTF parameters, taking tilt into account. It is not performing any phase-flipping corrections on whole tomograms. CTF correction is performed later as a per-particle process. This process requires metadata determined during tilt-series alignment, so it cannot be used with tomograms reconstructed using other software packages. 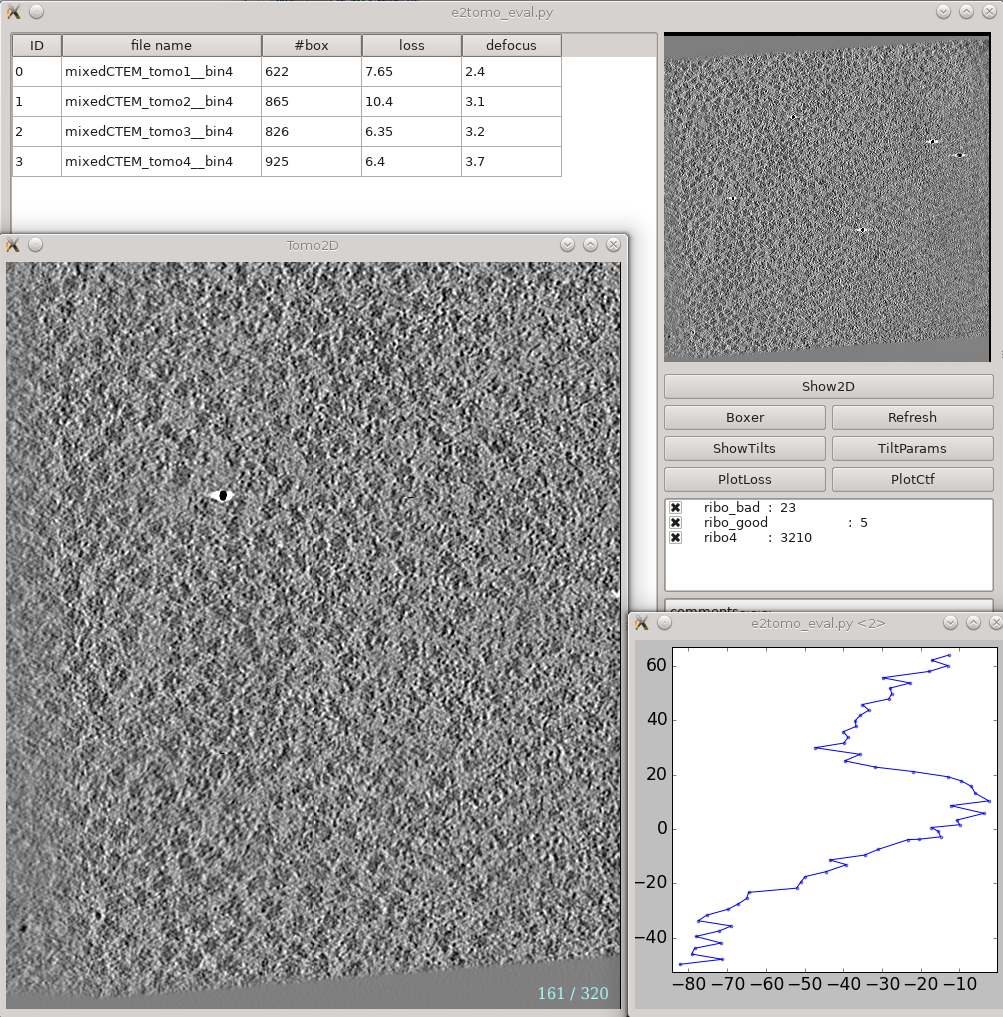 Analysis and visualization -> Evaluate tomograms can be used to evaluate the quality of your tilt series alignments and tomogram reconstructions. This tool will show more information as you progress through the tutorial, but can be used already at this point to make various assessments of your tomograms. Note that some of this information may not be available if you had notmp checked during the reconstruction. 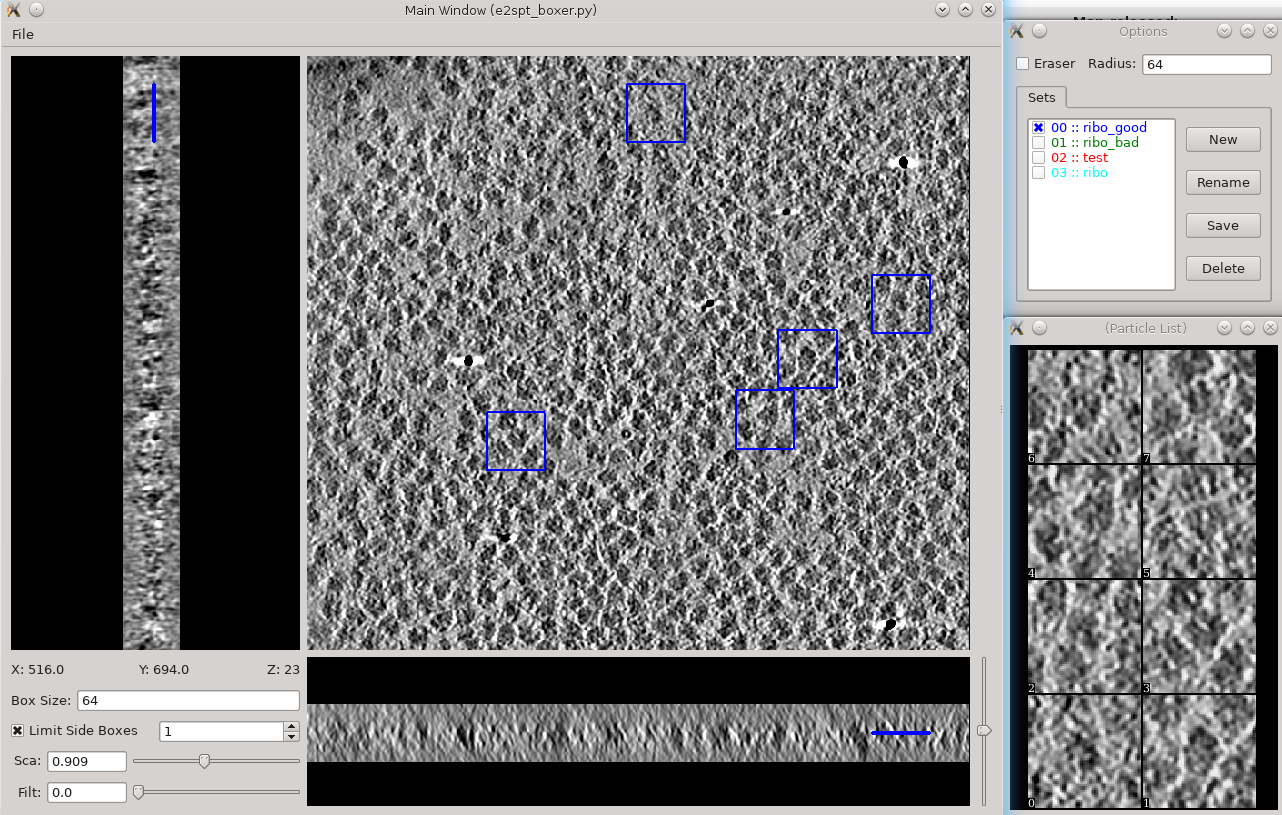 This section is brief and is only an update to the more detailed tutorial: TomoSeg. Some directory structure and user interfaces have changed in the latest version to match new tomogram workflow as described here: 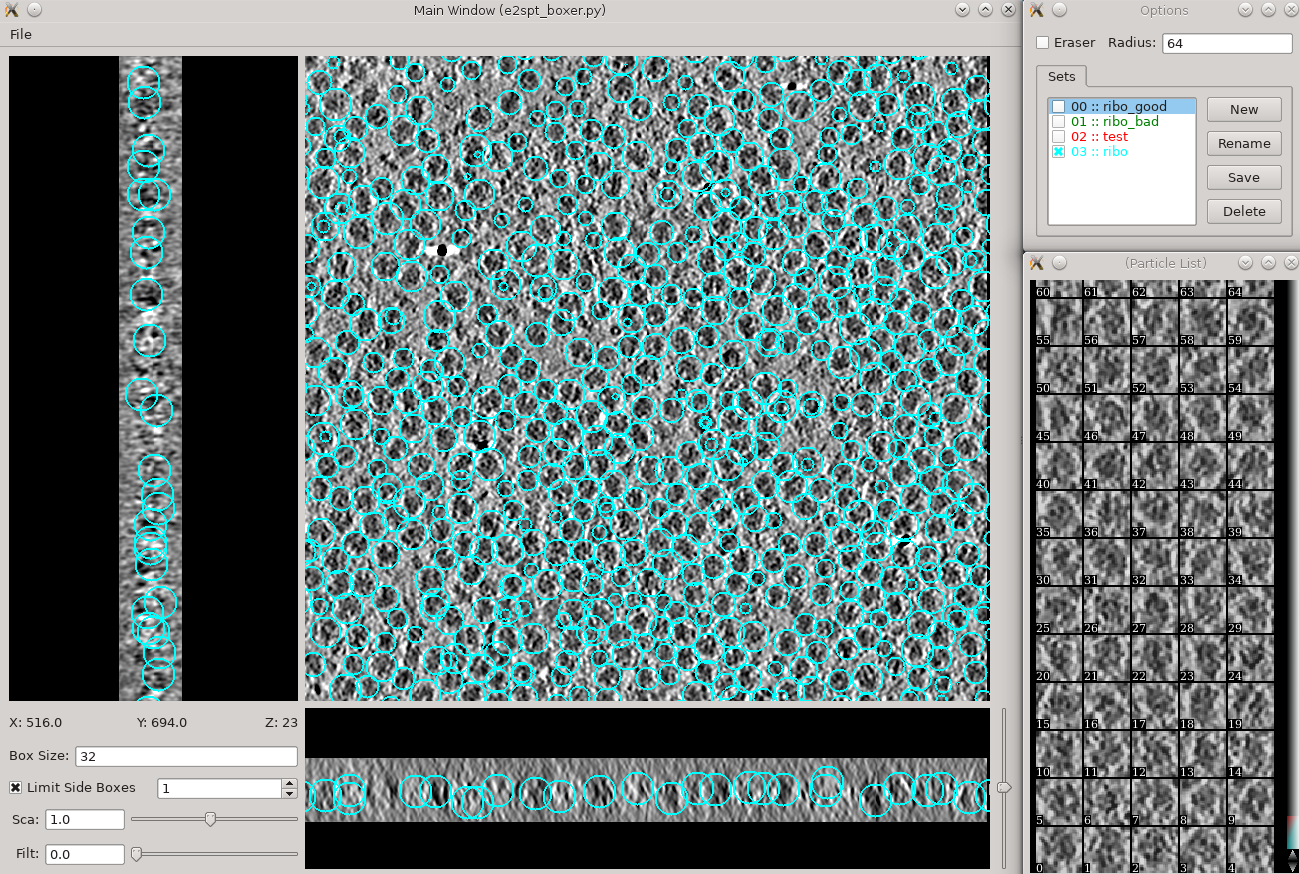 In this pipeline, the full 1k or 2k tomograms are used only as a reference to identify the location of the objects to be averaged. Now that we have particle locations, the software returns to the original tilt-series, extracts a per-particle tilt-series, and reconstructs each particle in 3-D independently.

For your own data

While intuitively it seems like (since the particles are already in 3-D) the concept of an "initial model" should not be necessary. Unfortunately, due to the missing wedge, and the low resolution of one individual particle (particularly from cells), it is actually critical to make a good starting average. Historically it has been challenging to get a good starting model, depending on the shape of the molecule. This new procedure based on stochastic gradient descent has proven to be quite robust, but it is difficult for the computer to tell when it has converged sufficiently. For this reason, the default behavior is to run much longer than is normally required, and have a human decide when it's "good enough" and terminate the process. If you use a small shrink value and let it run to completion, it can take some time to run. This is harmless, but unnecessary.

In this step, we will use the initial model you just produced as a template for finding all of the ribosomes in all 4 tomograms. If you completed the Tomogram Annotation step above, and have already extracted a full set of 1000+ particles, then you can skip this step, as we already have all of the particles. Note that here, and everywhere else in the tomography pipeline, reconstructed particles have positive contrast (look white in projection) and tomograms/tilt series have negative contrast (look dark in projection). If you wish to use a reference volume from the PDB or somesuch, then it should have positive contrast as is normal in the single particle CryoEM field.

Again, if you already did Tomogram Annotation above, this step isn't necessary. It is only required if you just did Template Matching.

Since this involves several thousand particles instead of 30-50, it will take quite a lot longer to run. The actual time will depend partially on the speed of your storage. 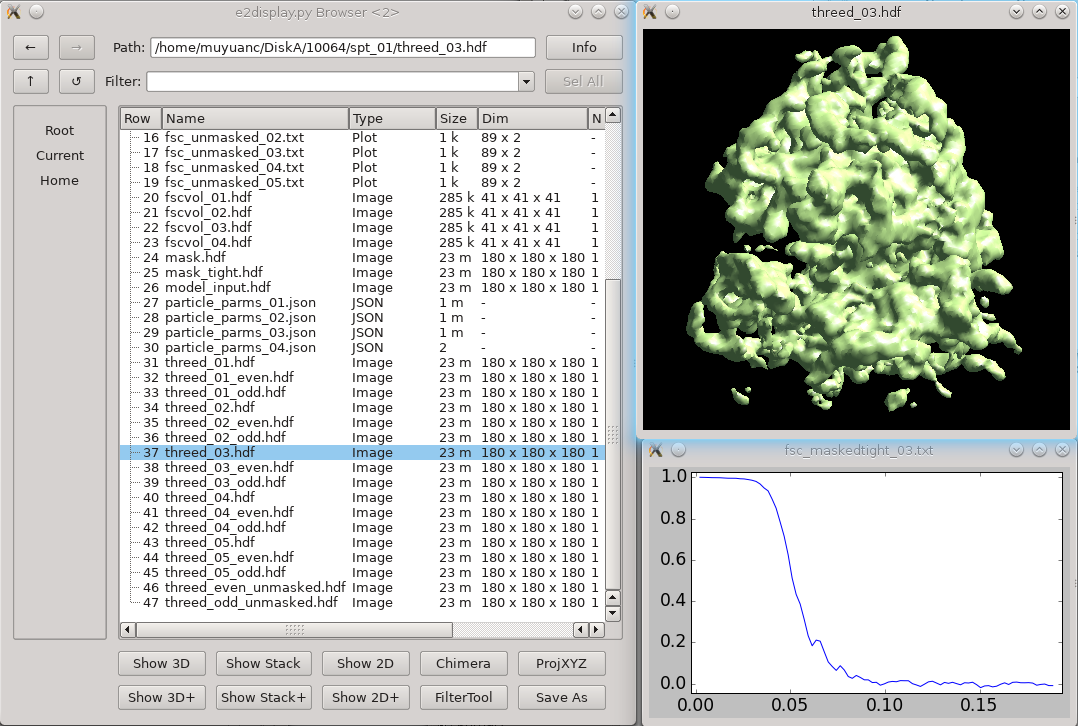 Results will gradually appear in spt_XX/ Feel free to look at intermediate results with the EMAN2 file browser as they appear. 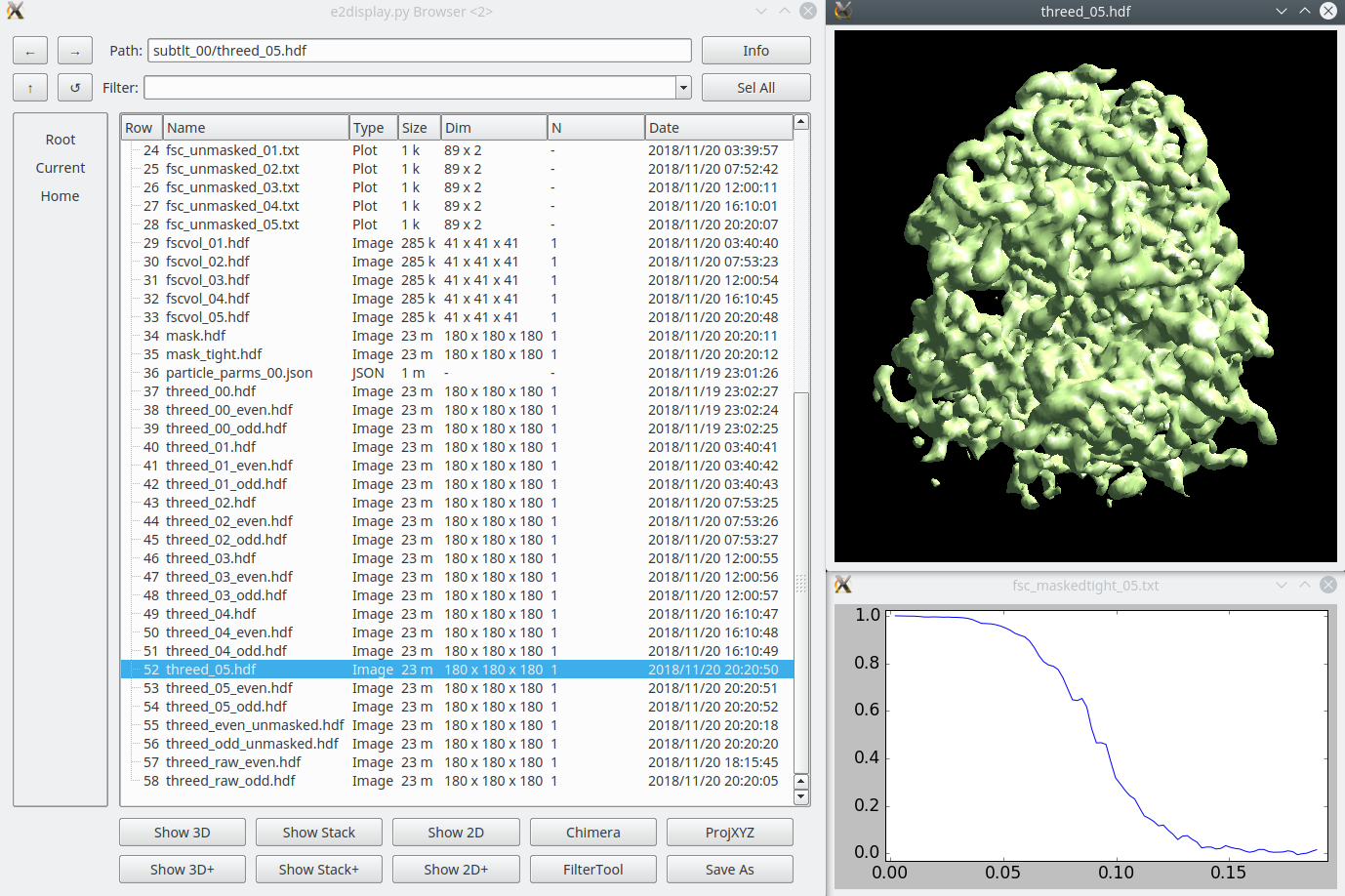 With the results of a good subtomogram alignment/average, we are now ready to switch to alignment of the individual particle images in each tilt, along with per-particle-per-tilt CTF correction and other refinements. This is effectively a hybrid of single particle analysis and subtomogram averaging, and can readily achieve subnanometer resolution IF the data is of sufficient quality. The tutorial data set is, but many cellular tomograms, for example, are not collected with high resolution in mind, and even with this sort of refinement will be unable to achieve resolutions better than 10-30 A, depending on the data. This process is completely automatic, based on all of the metadata collected up to this point. While it is possible to perform "subtomogram refinement" with subtomograms from any tomogram, Subtilt Refinement cannot operate properly unless all preceding steps occurred within EMAN2.

For the tutorial tilt series:

Congratulations! The final result of the tutorial will be found in "subtlt_00/". The final 3-D map will be "threed_04.hdf" with the default parameters. The final gold standard resolution curve will be "fsc_maskedtight_04.txt". The optional steps below are tools you can use to evaluate your results in more detail. 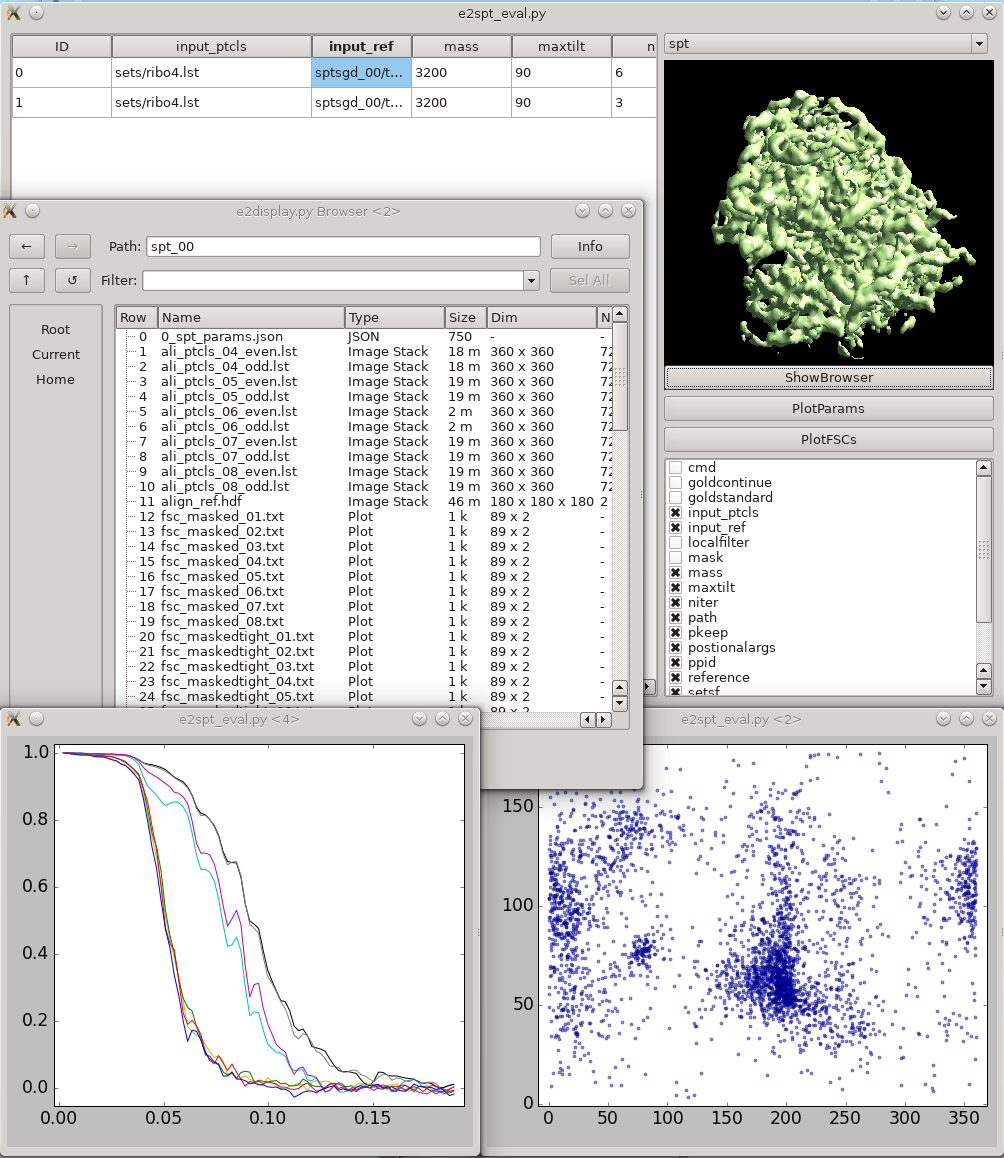